OJSC “BELAZ” together with its general distributor in the Russian Federation, CJSC «Trade House «BELAZ», continues implementation of the project on naming the dump trucks after prominent people and memorable dates that will be commissioned in 2020 at Russian mining companies. 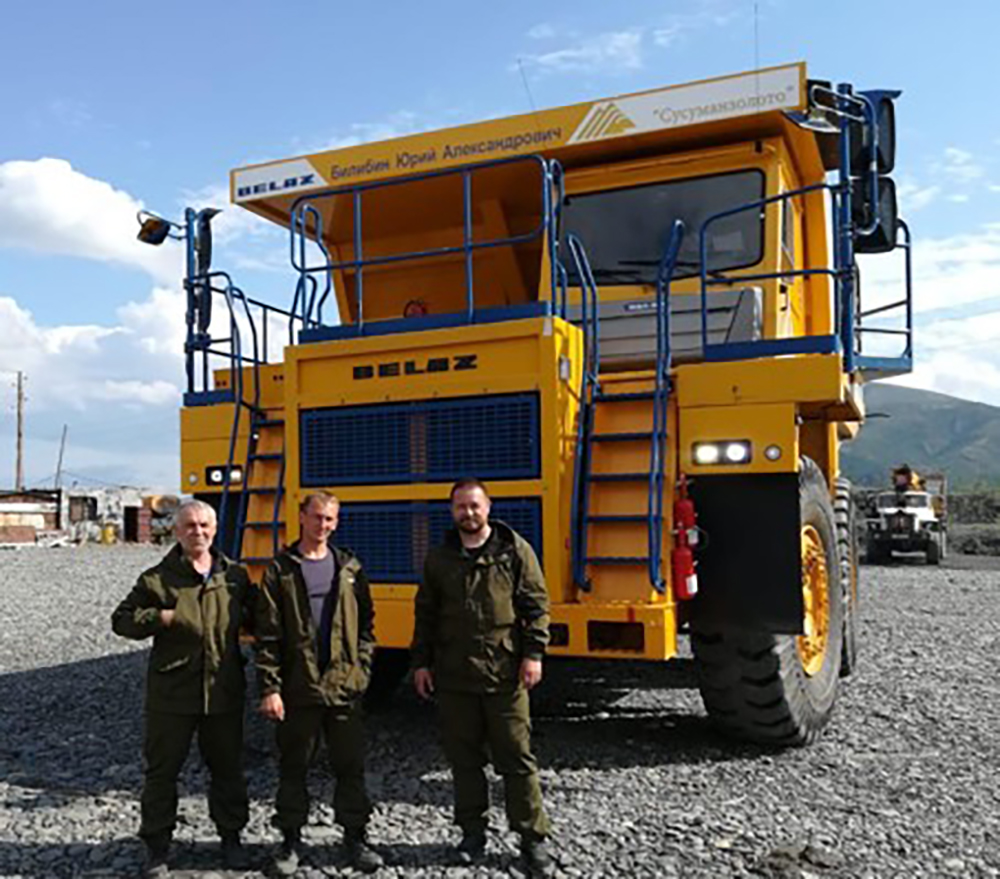 BELAZ-7555В has been commissioned at the mine of PAO “Susumanzoloto”, Oymyakonsky ulus, the Republic of Sakha (Yakutia). This new 55MT mining dump truck is named after a distinguished Soviet research geologist, Yuri Bilibin, who was a head of the expedition of the School of Non-Ferrous Metals in Yakutia and performed the most accurate and detailed prognosis on the gold mineralization of local water-collecting areas.

Official dealer of OJSC “BELAZ” in the region of OOO “Krasnoyarsk_BelazService” and JSC “RUSAL Achinsk, that also includes Achinsk Alumina Refinery, handed over a special outfit to the crew of BELAZ-7555В dump truck

This personalized BELAZ is not the first dump truck with the payload capacity of 55 tons at Achinsk Alumina Refinery. In March 2020, within the program of Achinsk Alumina Refinery on the modernization of the mining vehicles fleet, the Company has purchased 6 mining dump trucks BELAZ-7555В. Within a year, RUSAL is planning to buy some other batches of modern trucks since the technical characteristics of BELAZ-7555B comply with all the customer’s requests.

When choosing the vehicles to renew the trucks fleet, the specialists of Achinsk Alumina Refinery took into consideration the experience of using mining dump trucks at other companies and made a decision to buy 55MT BELAZ dumpers that are suitable for operation in winter conditions. New equipment shows high operating performance, has low consumption of fuel and oil.

The project of naming BELAZ high technology mining equipment after the outstanding people allows to outline the merits of those who made a considerable input into the development of mining engineering.

On September 17, 2020 ProBELAZ vocational guidance forum for high school students of two schools of Belovskiy urban district (Kemerovo region) was held. The forum was organized by the general distributor of BELAZ in the Russian Federation CJSC “Trade House “BELAZ” and the dealer in the region - "BELAZ-24".

A Large Research and Educational Center with the Participation of BELAZ is being created in St. Petersburg

On September 15, BELAZ and the St. Petersburg Mining University reached an agreement on the establishment of a large research and educational center in the field of mining and transport engineering on the basis of the St. Petersburg University. The agreements were reached during the visit of the delegation of BELAZ to the Russian university.